Home » Florida Crime News » Do I Have to Take a Field Sobriety Test in Florida? 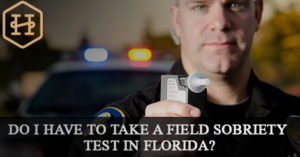 When you’re driving late at night on a Florida highway, few things are as stressful as seeing red and blue flashing lights in your rearview mirror. Suddenly, the only thing you can think about is the glass of wine you had at dinner, or the can of beer you enjoyed with a friend a few hours earlier.

Unfortunately, few people know their rights when it comes to dealing with the police during a traffic stop. If you consent to certain tests, such as a field sobriety test, you could unknowingly compromise your legal rights. If you have been charged with a DUI, get in touch with a Miami DUI defense lawyer immediately.

Like many states, Florida has an “implied consent” law, which means that everyone who gets a driver’s license is deemed to have consented to have the police measure their blood alcohol concentration (BAC) through a blood, breath, or urine test. These tests can include a breathalyzer.

If you refuse any of these tests, you face an automatic license suspension. This suspension moves quickly, so don’t wait to get a DUI defense lawyer working on your case. If you fail to act, you could lose your license.

As you can probably imagine, field sobriety tests can be influenced by many factors, including external forces like the weather and the temperature. For example, if you’re trying to walk a straight line in the middle of a torrential downpour, you may struggle to stay upright, let alone walk a perfect line.

Talk to a Dade County DUI Defense Attorney about Your Case

Getting charged with a DUI can be an overwhelming experience for anyone. When the police knock on your car window, it’s easy to panic.

Furthermore, the police don’t have to tell you that you are under no obligation to perform a field sobriety test. They may put you through a battery of these tests as they gather more and more evidence against you.

If you have been charged with a DUI in Florida, you don’t have to take these charges lying down. Fight back by working with an experienced Dade County DUI defense lawyer.