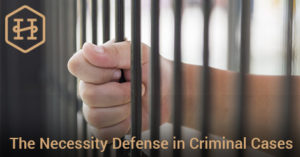 Life is filled with difficult decisions. In many situations, people are forced to make tough choices, even when none of their options are all that appealing.

If you committed a crime because you believed you had no other choice at the time, a Miami criminal defense lawyer may be able to argue you broke the law out of necessity. In Florida, necessity is an affirmative defense to criminal charges.

Proving You Acted Out of Necessity

Because necessity is an affirmative defense, the accused has the burden of proving he or she carried out a crime strictly under duress.

When a criminal defendant raises the issue of necessity, he or she must prove all the elements of the necessity defense:

Proving you acted under duress isn’t easy, and Florida courts require criminal defendants to give very good reasons for their decision to engage in unlawful conduct.

The necessity defense has been used with mixed results in several noteworthy cases over the years.

1. Driving drunk to escape an abusive spouse. The Minnesota Supreme Court allowed a woman to raise the necessity defense in a drunk driving case. On the night of her arrest, she attempted to sit in her parked car to avoid her husband.

Both spouses had been drinking, which led to an argument. The husband followed her to the car, where he pounded on the windshield hard enough to crack the glass. The wife then drove to a tavern less than a mile away, where she was arrested for driving drunk.

2. Political protest. In early 2016, a group of environmental activists unsuccessfully used the necessity defense to justify blocking train cars transporting crude oil. The five protesters were convicted of misdemeanor trespass, but the judge nevertheless praised their efforts to raise awareness about pollution and climate change.

On the night of the defendant’s arrest, police stopped him going 84 miles an hour in a 55 mph zone. Officers also observed him swerving across three lanes of traffic to reach an exit ramp. During the stop, the defendant claimed he was transporting a sick cat to the emergency vet.

The defendant fully admitted he had been drinking, and the police confirmed he was indeed transporting a sick cat at the time of the stop, but the court held that the threat of harm a defendant is trying to avoid must apply to the defendant or to another person. In other words, animals don’t count. Sadly, the cat died shortly after the traffic stop.

If you are facing prosecution, your criminal cases is not hopeless. There are many defenses to criminal charges.

To increase your chances of a favorable outcome, don’t wait to contact a Miami criminal defense lawyer. The sooner you get an experienced lawyer on your side, the sooner you can start getting your life back.