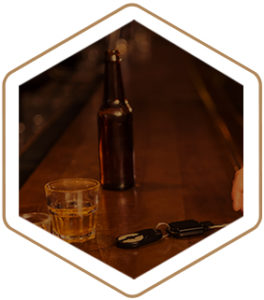 The Hansen Law Firm can assist those charged with this offense and provide their best defense available based on their situation.

Of course, this requirement does not apply if you were clearly drinking alcohol in a public location at the time of your arrest. Regardless of whether the charge is based on consuming alcohol or being intoxicated, the arresting officer must also believe that you are acting in such a way that breaches the peace or causes a public disturbance.

Disorderly intoxication Florida is a second-degree misdemeanor. That means that you could face penalties that include:

A judge could also impose more than one or all of the penalties as well.

It is also worth noting that arresting officers do have the option of dropping the intoxicated person off at their home or at a treatment facility if they would otherwise be charged with disorderly intoxication. Alternatively, the officer could also arrange for commercial transportation for the intoxicated person to send them home or a treatment facility. Usually, this means that the officer could call you a cab and instruct you to head home immediately.

Arresting officers are not required to show you this kindness, and you should not expect it. However, officers are still fulfilling their duties to the public under Florida law if this is the course of action that they choose to take.

Being “buzzed” or “tipsy” likely will not rise to the level that a disorderly intoxication charge requires. However, how drunk you are may not matter if you are consuming alcohol in a public location and disturbing the peace.

What is a Public Place for a Disorderly Intoxication Charge?

The statute that sets out the requirements for the disorderly intoxication charge states that you cannot consume alcohol in a public place. But, what is a public place? Some people assume that a public place has to be outside, but that is not necessarily true. A public place under Florida law for purposes of this statute includes any location, outdoors or otherwise, where the public has a right to go.

If you are intoxicated in your own home or on your own property, a disorderly intoxication charge is likely not available to the arresting officer.

Getting Legal Help with Your Disorderly Intoxication Florida