Home » Florida Crime News » Should Prisoners Have Access to the Internet? 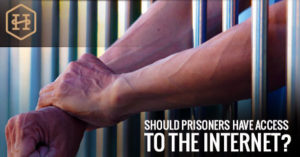